In December of 2018, our show premiered with an episode about the many versions of A Christmas Carol. It was a short episode, recorded on one microphone in Robin’s living room. We did our research an hour before recording, and there was no drink of the week. 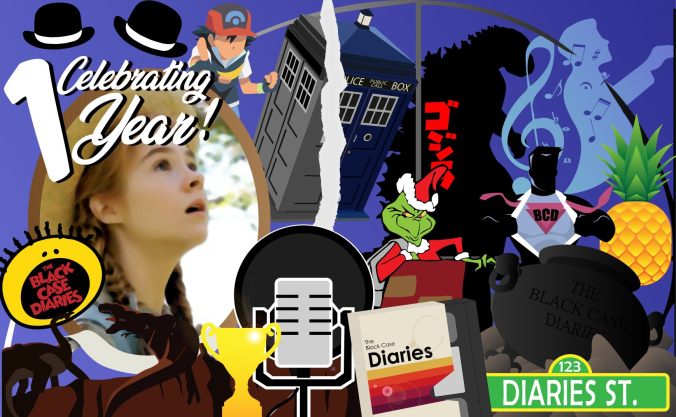 Now, our episodes are longer, we each have our own mics, our research is done days ahead, and we record in a small room that we call a studio. Christmas is a crazy time for all of us, so we have decided to close out 2019 with a very special Black Case Diaries Christmas Briefcase!

About a month ago, we asked our patrons and Instagram followers what holiday special they would like us to cover this month. They voted for Frosty the Snowman! Since it just snowed here in Ohio, we decided to head out and record this episode in the snow!

In 1949, country singer Gene Autry had a number one hit at Christmas. It was a song written by Johnny Marks and based on a story called, “Rudolph the Red-Nosed Reindeer.”

One year later, Jack Rollins and Steve Nelson came up with a new holiday song and sent it to Gene Autry, who was hoping for another Christmas hit. Not sure if Autry would take the song, they also brought a back-up to sell him: “Here Comes Peter Cottontail!”

This song was, “Frosty the Snowman!” Autry’s version made the top 40 in 1950, but was never quite as successful as Rudolph. It did well though, as covers by Nat King Cole and Guy Lombardo soon followed. Frosty became a character on merchandise, in parades, and even in a Little Golden Book!

I found many sources that speculated that Frosty was based on a snowman that appeared in a children’s book five years before the song. The book was, “Snowy the Traveling Snowman” by Ruth Burman. The book features a snowman with coal eyes, a silk hat, and a yellow (possibly corncob) pipe. He sings and dances with the children of the town, and at the end promises to return. One of the biggest similarities to the song is that Snowy makes the sound, “bumpity-bump bump” while Frosty’s running feet sound like, “Thumpity-thump-thump.”

Many people also believe that the song takes place in Armonk, NY, a town that one of the songwriters, Steve Nelson, lived in. Every year, the town celebrates Frosty Day. According to the Frosty Day website, Nelson’s widow confirmed that the song was written in the town.

Patty Fenwick, the step-granddaughter of Jack Rollins, inspired him to write the song. According to the story, when Patty was a young girl, she was excited to build the first snowman of the season. The snow melted overnight, and Patty was distraught to find that the snowman was gone. Her grandpa said to her, “please don’t cry, I promise you he will be back someday soon.” When Rollins told his songwriting partner about the story, they created Frosty the Snowman.

The song was covered by so many artists, we’re not going to spend time naming them all! Some of them include: Jimmy Durante, Bing Crosby, Ella Fitzgerald, Fats Domino, Perry Como, The Jackson Five, and Loretta Lynn.

In 1954, United Productions of America produced a three minute animated short put to the song “Frosty the Snowman.” It was directed by Robert Cannon and was filmed in black and white. UPA is also known for creating Mr. Magoo, so you might notice some animation similarities between Mr Magoo’s Christmas Carol and this short. The short is provided below!

In 1969, almost 20 years after the world first met Frosty, Arthur Rankin and Jules Bass created an animated Christmas special about the snowman.

Before we go, let’s talk about 2019. On Twitter, we asked what your favorite episodes of ours have been. Bang Average Movie Podcast responded, letting us know that they enjoyed our cinematography and Top 10 Non-Disney animated movies episodes! Thanks so much, guys. We try to do as many different things as we can! The Cinematography episode is what we call a “concept” episode, where we talk about something that involves movies and TV, but not any specific movies or shows. The Non-Disney episode is one of our list episodes. Those are by far the hardest to do, because we always want a balanced amount of research for each movie that we talk about. That episode in particular was probably the most rewarding of the year, because we got a lot of positive feedback on it.

What were our favorite episodes?

What were our most difficult episodes?

What are our favorite memories from the past year?

Who did we enjoy connecting with this year?